The Ubiquitous Speech Collection & Analysis System (USCAS) consists of distributed Sensor Nodes that capture acoustic signals and transmit them over a RF Network to the Control Station. The Sensor Nodes are equipped with a sensitive microphone that captures acoustic signals in its vicinity; a powerful processor that analyses, compresses, and packetizes these acoustic signals; and a RF Transceiver that transmit these packets to a central coordinator. The central coordinator connects to a Control Station that can be used to monitor the acoustic activity in the area, and can also upload these packets to a Central Server for further use. The captured audio can also be downloaded and played on smart mobile.

The overall architecture of the system is given in following figure. It consists of a set of independent Sensor Nodes forming a wire-less sensor network, a Coordinator node that acts as a link to the Control System, the Central Server, Smart Mobile and a software suite.

This System can be used in many applications, including security and surveillance, which require acoustic capture and Monitoring. 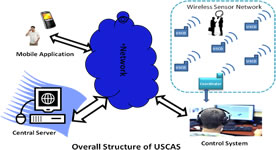