Sampige Road-Puttenahalli line could be complete before April 2017 deadline

Currently , only the Byappanahalli-Mysuru Road and Sampige Road-Nagasandra lines are operational. However, trial runs can start on the Sampige Road-Puttenahalli stretch once work on the three stations attains completion.

Emphasising the state government's commitment to ease mobility in the city and decongest roads, Bengaluru development minister KJ George said, “With 65 lakh vehicles choking the roads, our prerogative is to expedite the metro project. Development is difficult in thickly populated areas, but BMRC has nearly completed the work. We are looking at getting the entire network operational by April next year. But, if the work is completed, we can set an earlier date.“ However, George reinforced the need to adhere to the highest standards of safety . “BMRC has to obtain a certificate from the commissioner of Metro Rail Safety ,“ he added.

The corporation is keen on obtaining the final safety certificates by the end of March, after it completes trial runs. “The trial run on elevated parts of the southern corridor from National College station to Puttenahalli will begin around November 18. However, it will take time for the underground stretch from Sampige Road to KR Market to be electrified,“ said BMRC MD, Pradeep Singh Kharola, adding that the trial run on the north-south corridor would begin in January '17. 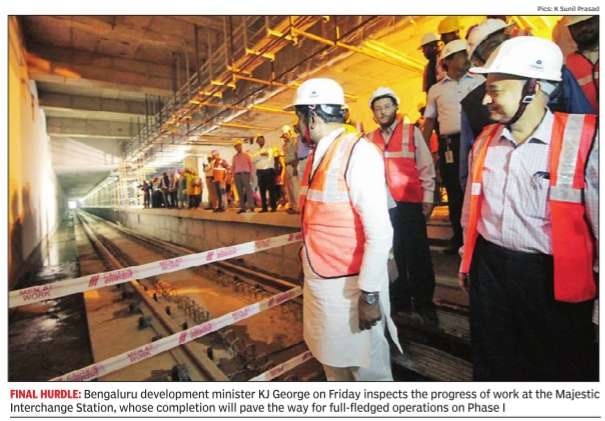 In a bid to accommodate more passengers during peak hours in the morning on the ByappanahalliMysuru Road line, metro will operate trains every four minutes from 9.10 to 9.58am starting Monday .

“On the eve of the Deepavali holidays ­ October 28 ­ we witnessed a record ridership of 1,51,726 on the ByappanahalliMysuru Road line. This prompted the increase in frequency . Moreover, we need to gear up if we are to operate trains at a three-minute frequency once the entire 42km network is up and running,“ said Kharola. BMRC said that, on an average, 1.2 lakh people travelled on the route every day .

Across October, the time-interval between trains was reduced to five minutes to handle the spurt in demand. BMRC is contemplating operating 17 trains during peak hours, and having one on standby .BMRC officials told TOI that metro trains will have six coaches instead of three, from June 2017 to meet the increasing demand.

Among the most commonly aired grievances of metro passengers is the unavailability of mobile network in underground tunnels. However, that problem is all set to be resolved. American Tower Corporation (ATC), a leading wireless telecom and broadband infrastructure company has bagged the tender to install towers that will provide ac cess to mobile networks in underground stations and tunnels. Officials said that the facility is likely to take six months to be completed.

BMRC will soon power its stations at Byapanahalli and Peenya with solar energy. The corporation has signed an agreement with CleanMax Solar ­ a central government certified company ­ to set up solar installations at these stations in Phase I and four depots in Phase II ­ Challaghatta, Whitefield, Kothanur and Hebbagodi.

“The 1.4MW installation can generate up to 10,000 units, which help power the depot facilities.However, it is not sufficient to power the trains, but it will help us save Rs 51 crore over 25 years on energy ,“ said NM Dhoke, director of operations, BMRC.

BMRC is currently paying Rs 5.7 per unit to Bescom for electricity .But, the corporation will not paying for the installation. It will pay Rs 5.5 per unit of solar power to CleanMax for the first three years, at the end of which all six installations will be handed over to BMRC.

BMRC submitted the detailed project report (DPR) on the Outer Ring Road metro line from Silk Board to Mahadevapura to the government before the Deepavali holidays.Kharola said that the entire cost of the project could go up to Rs 4,000 crore, although the cost was pegged at Rs 3,600 crore in the initial proposal, available in public domain.

“The DPR has been sent to chief minister Siddaramaiah and he will place it before the cabinet for approval,“ said George.

On funds for the second phase, Kharola said, “We will depend on government sanctions, and borrow from institutions.“ BMRC is looking to generate funds through cess for new layouts around 500m from metro lines, premium floor space ratio (FSI) for projects along the corridor, advertisement and lease rental schemes by providing direct access to tech-enclaves from stations.

BMRC has received 1,300 recommendations from citizens regarding the nine routes that were mooted for a metro link to Kempegowda International Airport (KIA). “The government will discuss these recommendations and find out which route is feasible,“ George said.

Linking the line from MG Road to KIA has already been ruled out.Sources said that a Mehkri CircleHebbal-KIA line would have too few stops, and might not result in high ridership. The Nagawara-KannurBagalur or Peenya-YelahankaKogilu lines, however, could see high passenger traffic, they added.

Namma Metro has unveiled an official app, which enables commuters to plan their trip across the city by providing all necessary details on the schedule of the metro and BMTC feeder services, besides allowing them to recharge cashless smart transit cards.

Developed by the Centre for Development of Advanced Computing (CDAC) ­ a scientific society under the ministry of electronics and IT ­ the app is available on Android platform. KJ George formally launched the app on Friday. Commuters can use the app to buy a smart card, and recharge the same using the KarnatakaOne mobile payment gateway. The app can be downloaded from Google play store.

Rotary Bengaluru Midtown donated more than 100 wheelchairs to BMRC on Friday. The disabled and elderly can avail a wheelchair at all metro stations. They can use it on the train as well, and subsequently drop it at their destination station.Along with the Rotary Club, BMRC has decided to equip each of the 40 stations with two to three wheelchairs.

Initially, the residents of south Bengaluru perceived the Metro project as both a boon and a bane. While it would save them the trouble of spending countless hours on congested roads, the cost they had to pay was huge, as tree-lined boulevards made way for concrete pillars for the project. The long wait for the Metro's arrival in these parts of the city must have been doubly frustrating.. But, news of a breakthrough at the Majestic interchange is bound to give them hope that they can soon travel to the northern and western pockets of the city within minutes.