e-safeT, an temperature data logger is designed and developed by the embedded systems group of C-DAC Noida. The system has been implemented at 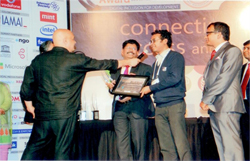 India is the seventh-largest country by area, the second-most populous country with over 1.2 billion people. With such a large geography and population, effective health care and supply chain of perishable food items chain becomes a challenge. The criticality of safe distribution of life saving articles like blood, vaccines and drugs in a country like India, marred by huge variations in temperature cannot be overestimated.

India’s has around 2545 licensed blood banks with an annual blood requirement of about six million units. However the supply hovers around 3.5 million units only. The ever widening demand and supply gap is making the blood banks balk under choked supplies.

As per National AIDS Control Organization, the storage and transport of blood should be within a temperature controlled environment. Permanent monitoring of blood temperature from storage to distribution and back again ensures an uncompromised level of quality. This removes the guesswork of what might have happened to your blood outside of the blood bank.

The Indian economy is primarily based on agriculture. More than 52 percent of India’s land is cultivable, compared to the global average of 11 percent. The transaction volume of perishable products is estimated to be around 230 million metric tons. Although India has the potential to become one of the world’s major food suppliers, the country’s inefficient cold chain network results in spoilage of almost 40 percent of its total agricultural production.

e-safeT is a compact, ultra-low power data logger consisting of a high resolution temperature sensor, memory, visual indicators and wireless link. This can be used to track the thermal history of the items (Vaccine, Blood bags, Medicines, Perishable goods, and other temperature sensitive items) while in storage or in transit. The wireless link is used for location stamping at key transit points.

The logged data can be downloaded and viewed on a computer to enable corrective actions in the cold chain and also to ascertain the suitability of the tracked material for use.

e-safeT software is a smart Windows based software package that is included with every e-safeT data logger. It allows for easy setup, retrieval, interpretation and export of the recorded data. Simply connect your e-safeT data logger to the USB port and begin communicating immediately.

The offline analysis provides graphical representation of the temperature variation over time and Identification of zones where temperature violation took place.