1. SUGAM: An e-Governance Solution for CDSCO 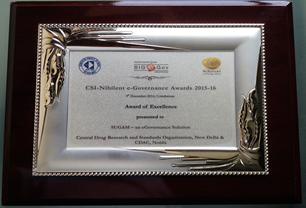 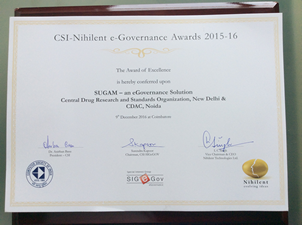 SUGAM portal provides the complete e-Governance solution for Indian drug regulatory, Central Drugs Standards Control organization (CDSCO), by enabling end to end online processes for application submission & grant of licenses, permissions or NOCs for Import/Manufacture of Drugs,Medical Devices, Cosmetics, and Clinical trials .It consolidates the decentralized Indian Drug regulatory system under single umbrella by providing the unified monitoring mechanism and statistical dashboard. It has enabled ease of business for Pharmaceutical Industry &Drug regulators and enabled the digitization of old records in a searchable format making the availability of important information on a click of a mouse. SUGAM was launched by Sh J.P Nadda,Honorable Union minister of Health & Family Welfare on 14th Nov 2015 .SUGAM has received the prestigious CSI Nihilent Award of Excellence at CSI 2016 Coimbatore Chapter,24th Jan 2017. 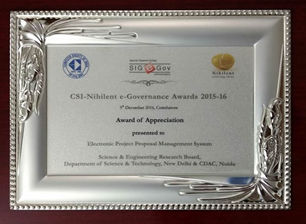 Electronic Project Proposal Management System (e-PPMS) is a web-based system that encompasses the complete life-cycle of funding of R&D projects, beginning with online submission of project proposals for funds, to monitoring and management of funded projects.

e-PPMS is intended towards making the entire process of funding R&D projects paperless and bring in the much needed transparency in the system. Efforts are towards providing easy access to information and statistical analysis/results on all the projects funded by the various departments of organization. The project aims at providing service to the citizen in terms of ease in applying for research. Through in-built communication models and easy tracking of the proposal status, the project will provide researchers timely updates on their application and will reduce undue time delays. Also, the project will help to keep the intellectual property rights of the citizens secured by allowing only authorized people to view the proposal details. It also increase the outreach and recognition of the organizations.

Before this initiative, all the research funding through the government agencies was done manually. It had severe drawbacks that hampered the quality and quantity of research going on in the country, a few listed below:

There were many challenges in terms of implementation strategy and infrastructure that were identified in order to overcome the drawbacks mentioned above. A few of those challenges are listed below:

In SERB, we implemented e-PPMS as a pilot project for their one Major Scheme only (Extra mural Research Funding Scheme). The System was launched by Hon'ble Minister on 31st January, 2014. Before implementation as pilot project, we planned for soliciting feedbacks from stakeholders, tracking the activities and outcomes and recording any adjustments we made in the system to get the desired results which helped us in the following manners:

To the stakeholders it has come fruitful in many ways, E-PPMS has not only increased the ease of access to the end users but it has also enhanced the capability for the internal users to communicate with the end users. It has inbuilt channels for communication e.g. communication module which utilizes both email and mobile based communication. As a result of this, the whole process has moved from a bulky set of paper file to some kilobyte of data which contains all the detailed information including the complete proposal, communication pertaining to the proposal and its proceedings etc. Earlier researchers, who applied to various fields for research, had to travel or communicate with the concerned department for any query or addendum. Online system has got this ease of keeping a track of every change.

The online system is far more effective than the offline system. In terms of services provided, it has covered all aspects of the offline system and has grown further beyond that. Online system is not only capable of all the offline processes like the submission of a research proposal, its evaluation by the internal members, online meeting decisions, release of funds and the monitoring post approval but it also covers the more broader aspect of analyzing the type of research going on in the country. The system can generate different types of reports on the go based on different parameters like the research domain, demographics and the investigator qualifications etc. It covers every characteristic possible from the system that can be incorporated to identify the status of research in the country