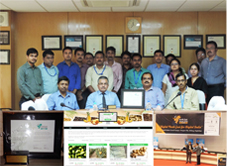 The Ongoing North-East Project “Centralized e-Auction System for North Eastern States (Sikkim, Assam, Arunachal Pradesh, Meghalaya, Mizoram, Manipur, Tripura and Nagaland)” of C-DAC Kolkata has received the 6th eNorthEast Award 2016 (Winner) at the Award Summit held in Shillong on 26th February 2016. The project has been presented before the Jury Members by Shri Goutam Kumar Saha, Scientist-E & Project Chief Investigator. The project has been judged as the Winner in the Category of eCommerce and Business and the award has been received by Shri Goutam Kumar Saha. The eAuction software has been developed by the Software Technology Group of CDAC Kolkata. Now it is being deployed in the eight North-East states of India for lot-based online forward auctioning of the North East Farmers’ Agricultural produces (Large Cardamom, Pine Apples, Jackfruits, Kiwi, Passion Fruits, Citrus, Ginger, Turmeric etc.) through NERAMAC, DONER, Guwahati. The project aims to support farmers to get remunerative prices for their produces and thereby to bridge the gap between the farmers and the market.