Digitization of Rare Books with Retrieval System and Portal

Digitization of Rare Books with Retrieval System and Portal
July 01, 2016

CDAC, Kolkata has been working in the field of Digitization of rare books and documents including Retrieval System solution since 2005 and has successfully accomplished digitization of around 50 Million pages from more than 1 lakh rare books of various libraries of Eastern and North-Eastern part of India under the sponsorship of DeitY and MoC, Government of India.

The aim of the project is to digitally preserve and disseminate rare Administrative Reports, Manuals, Rules, Calcutta Gazettes, India Gazettes, Civil List, Reports of various committee and commissions, Memoirs, etc. under the British Rule through www.wbsl.gov.in web portal. The progress of the work is being appreciated by the Government of West Bengal and they have acknowledged the contribution and dedication of CDAC, Kolkata towards the implementation of the project by acknowledging the work of CDAC, Kolkata in the regional newspapers of West Bengal, viz., Ei Samay, Pratidin, Bartaman and Uttarbanga Sambad on June 29, 2016. 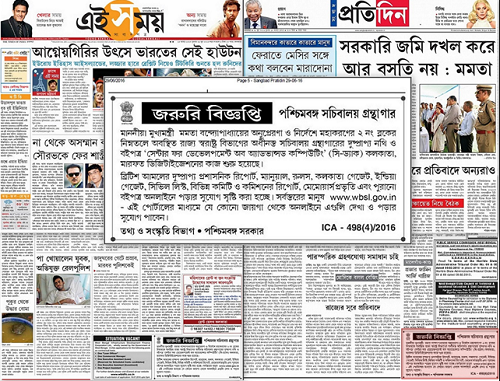