During 1996-97, C-DAC installed another parallel system, PARAM Open Frame with Super SPARC as the processing nodes at ICAD. This system was used for research activities in the field of Computational Fluid Mechanics and Structural Analysis and Academician O.M. Belotserkovskii, Director of ICAD expressed his satisfaction over this joint collaboration. 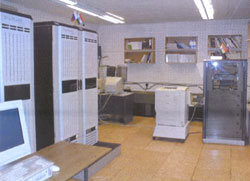 Apart from the use of PARAM Supercomputers supplied by C-DAC to ICAD, the collaboration involved scientists from both ICAD and C-DAC visiting each other's facilities and participating in their research and development activities for periods varying from a few weeks up to a year. The significant areas covered in the research projects included computational fluid dynamics and climate modeling.

This collaboration was brought into focus by C-DAC exhibiting its PARAM system and scientific applications that it is capable of running.

The ongoing collaboration resulted in the Governments of Russia and India deciding to set up a Russian Indian Centre for Advanced Computing Research (RICCR) in Moscow nodalised by the Indian Dept. of Science and Technology and Russian Academy of Sciences. Dr. Murli Manohar Joshi, Hon'ble Union Minister for Science and Technology, Human Resources Development and Ocean Development formally inaugurated the Centre in July 2000. To coincide with this event, an 8-node PARAM 10000 based on ultra SPARC processor, the third in the series of PARAM Supercomputers built by C-DAC, was supplied and commissioned in RICCR. Simultaneously, four specific projects were identified for joint development in the areas of Weather forecasting, Seismic data processing, Computational fluid dynamics and Parallel compliers.

The projects having been successfully completed have enabled specific solutions to be offered to prospective customers in their respective areas. 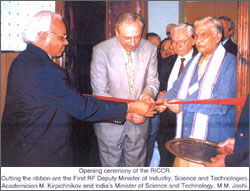 During April 10-27, 2002, a three-member team from C-DAC visited RICCR, Moscow, to upgrade the firmware on PARAMNet cards and HPCC Software on the existing 8 node PARAM 10000. The up gradation was successfully completed followed by the benchmarking using programs provided by NASA, U.S.A. Also some of the CFD (Computational Fluid Dynamics) programs developed by ICAD Scientists were executed and the performance was evaluated.

The NASA benchmarks were executed on the two networks present on PARAM 10000, viz Fast-Ethernet and PARAMNet. The results obtained showed that these benchmarks take significantly less time to execute on the PARAMNet as compared to Fast-Ethernet. The MFLOP (million floating point operations) readings using PARAMNet were also found to be better than those on the Fast-Ethernet.

The CFD program called SPH developed by Mr. Paul Matyushin of ICAD was executed on both these networks as well as on the new supercomputer installed in Moscow (called MVS), and the results were tabulated for comparison.

A communication overhead measurement suite called hot potato developed by C-DAC was also executed on both these networks. The Fast-Ethernet network makes use of TCP/IP in which the Operating system overhead for send/receive is extremely high, bandwidth is low, latencies are high and error rates & per packet processing cost are high as well. The PARAMNet makes use of the AM (Active Messages) library as per the specifications of the University of California Berkeley. This is adjudged to be a better protocol with reduced overheads, high bandwidth, low latencies and which exploits the reliability features of SANs (System Area Networks). Also the per-packet processing cost is lower.

During this exercise, the C-DAC team also upgraded the PARAM 10000 8-node system to a 12-node system for the specific needs of RICCR. The overall results achieved in a short period of time were appreciated by the scientists of RICCR.