“The idea was to have a massive online library, where resources from across fields available in all possible forms, could be collated and made available on a single platform,” said Dinesh Katre, senior director and head at C-DAC’s Human-Centred Design and Computing Group 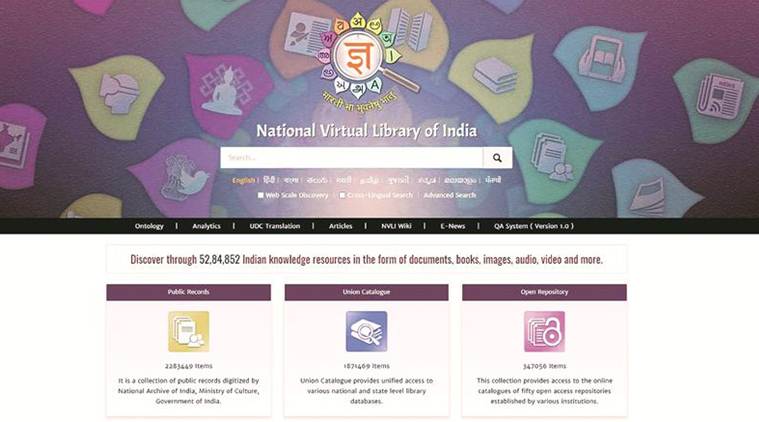 This is the quantum of multi-lingual ‘knowledge resources’ to be made available in the form of documents, books, images, audio, videos and other forms in the coming months.

Spearheaded by the Centre for Development of Advanced Computing (C-DAC), headquartered in Pune, the massive the National Virtual Library of India (NVLI) will be an online platform covering tens and hundreds of fields, ranging from arts, music, dance, culture, theatre, science and technology to education, archaeology, literature, museums, cartography maps, e-papers and manuscripts, among others. This programme is a part of the National Mission on Libraries initiated by the National Knowledge Commission under the Ministry of Culture. A limited-version launch of the NVLI portal by Shravan Kumar, joint secretary in the ministry, was recently held in Mumbai.

“The idea was to have a massive online library, where resources from across fields available in all possible forms, could be collated and made available on a single platform,” Dinesh Katre, senior director and head at C-DAC’s Human-Centred Design and Computing Group, told The Indian Express. This would largely benefit researchers, students and subject experts, among others, who would no longer need to hunt or spend hours for reference material in traditional library buildings. Moreover, these contents will be preserved permanently for future requirements too, he added.

Once formally launched, this could be one of the world’s largest virtual libraries where information on such diverse subjects are available. Currently, Australia operates a similar facility named Treasure Trove. The biggest advantage for India is the federal government system, where data gathering from government-run institutions is easier. “We are also open to contributions from private parties, but for that MoUs will be signed,” he said.

While C-DAC is working on developing softwares to accommodate such multi-lingual data, a portal will be open for common users in the coming months. Other partnering institutions for this project include IIT-Mumbai, Indira Gandhi National Open University (IGNOU), Raja Ram Mohan Roy Library Foundation, Kolkata, and Kalyani University, West Bengal.

“We have nearly 40 institutions which will share their data in whatever available formats. It will be reviewed by a team of experts before it is classified into categories. Once launched, the platform will be freely accessible for editing or contributions from outsiders or subject experts, making it more user-friendly,” added Katre. C-DAC has been conducting training workshops and seminars at these 40 institutes so that there is a standard format for documenting the varied contents, presently measuring a few terabytes.