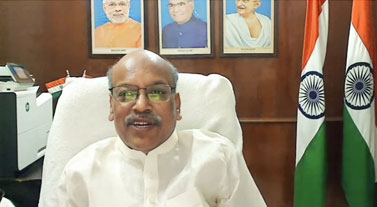 On the 34th day of its founding, three new and innovative services are the Cyber ​​Security Operations Center (CSoC) and C-DAC’s unique high-performance computing software solution, Parallel Development Environment (ParaDE) and Automatic Parallelization Compiler (CAPC). The technology has been announced. According to C-DAC.

As part of its founding date, CDAC has dedicated its newly established 6000-square-foot Cyber ​​Security Operations Center (CSOC) to countries that provide end-to-end security solutions, including managed security services. ParaDE is an integrated development environment (IDE) for creating parallel applications on the HPC platform. CAPC is an innovative software that provides a fast and effective solution for code parallelization by automatically converting sequential C code to the corresponding parallel code suitable for the target parallel hardware.

Another app-based system, called MANAS, Mental Health and Normalization System, has also been individually designated by the Government’s Chief Scientific Advisor. Of india. MANAS is a comprehensive and scalable national digital welfare platform for promoting the mental health of the Indian people, with the goal of “reaching unreachable” through the Digital India Initiative.

While talking about the event, Shri Sanjay Dhotre said the role of research organizations like C-DAC is important for the realization of Atmanirbhar Bharat Abhiyaan’s vision or the government’s independent Indian campaign. Of India, which aims to make the country and its citizens independent and independent in every sense. He praised C-DAC’s contribution under the National Supercomputing Mission (NSM), which enables the manufacture of systems and components for high performance computing in India. This will give MSME a great impetus for the development of components in advanced technology areas in the country.

Shri Dhotre also emphasizes the role of C-DAC in Meity’s National Policy on Electronics 2019 (NPE 2019) and envisions India as a global hub for electronic system design and manufacturing (ESDM). Build a chipset and an environment where the industry can compete globally. “As part of the microprocessor initiative, C-DAC is doing very well in this direction by developing a portfolio of 32-bit processors named VEGA and providing the same for MeitY’s Swadeshi microprocessor challenge. You can see that we are proceeding to. “

The minister added that CDAC, on the one hand, is deeply involved in core research such as high performance computing, artificial intelligence, 5G, blockchain, augmented reality / virtual reality, cybersecurity, and Indian language computing. We have successfully transformed the lab’s achievements to benefit the grassroots that create social impact. Typical of such national deployments are emergency response support systems for the elderly, women, and people in need, e-Sanjeevani telemedicine, and national mobility to facilitate transportation. There are cards and so on.

At the 34th Anniversary Celebration, the Minister concludes his speech with the aim of C-DAC now achieving higher goals and establishing itself as a world-renowned institute. I said it should be. This requires a collaborative and synergistic approach with academia, R & D, start-ups and industries.