"Women in Cyber: Making a difference" Awards presented by 'ASSOCHAM: The Knowledge Architect of Corporate India' has been bagged by key C-DAC members.

Dr. Dinesh Katre, Senior Director & HOD at C-DAC Wins 2020 Emmett Leahy Award for his outstanding contributions Accomplishments that Have a Major Impact on the digital information and records management.

We are pleased to inform that Dr. Dinesh Katre has won the prestigious 2020 Emmett Leahy Award, which he received from the hands of Dr. Vijay P. Bhatkar, the founder Executive Director of C-DAC and Chancellor, Nalanda University, who was the Chief Guest in the ceremony that took place on 29 October 2020 at C-DAC Innovation Park, Pune.

The Pierre Fabre Foundation has selected initiative MoSQuIT which was developed under the leadership of Dr Hemant Darbari, Director General, C-DAC to receive one of the six Global South e-Health Observatory Awards in 2018. The Prize was awarded at the Conference organized on the 2nd of July 2018 in Lavaur (France) at the Foundation's headquarters. 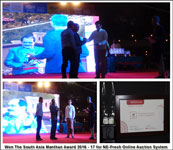 The NE-Fresh Online Auction System, developed by Software Technology Group of C-DAC Kolkata, under the ongoing North-East Project - Centralized e-Auction System for North Eastern States (Sikkim, Assam, Arunachal Pradesh, Meghalaya, Mizoram, Manipur, Tripura and Nagaland) has received the South Asia Manthan Award 2016-17 in the category of Business and Commerce at the 13th Manthan Award Summit held on 25th February 2017 at Suraj Kund Grounds, Faridabad, Haryana. The Online Auction System (https://eauction-neramac.in) has already been deployed in the North-East state of India for the use of NERAMAC for conducting live auctioning of NE Farmers’ produces for better prices. The project has been presented by Shri Goutam Kumar Saha, Scientist-E & Project Chief Investigator.

C-DAC Mumbai, has received the prestigious CSI Nihilent Award of Appreciation at CSI 2016 Coimbatore Chapter on January 24, 2017 for its Mobile Seva Project.

CDAC Noida was awarded the Skoch Smart Award for SUGAM: An e-Governance Solution for CDSCO.

A one of a kind e-government initiative, the Pradhan Mantri Gram Sadak Yojana (PMGSY), was launched by the Govt. of India to provide connectivity to unconnected rural Habitations as part of a poverty reduction strategy. The Government of India is endeavoring to set high and uniform technical/ management standards and facilitating policy development and planning at state levels in order to ensure sustainable management of the rural roads network.

Launch of Vikaspedia-Telugu poster by Hon'ble Minister of Communications and IT, Govt of India

C-DAC Noida has been awardedthe e-assam certificate of participation, during the summit held on 10th April’15 at NEDF, Guwahati.

E-Governance group of C-DAC NOIDA has been awarded the most innovative Pilot Implementation Project on "Center of Excellence for Digital Preservation" under National Digital Preservation Program by the EMC Forum 2015. The pilot project is executed for Supreme Court of India and Delhi District Courts.

C-DAC has been awarded the "SKOCH ORDER-OF-MERIT 2015 award" under SMART TECHNOLOGY category for various projects. The award was presented during 42nd SKOCH Summit held at India Habitat Centre, New Delhi during December 10-11, 2015.

December 14, 2015: C-DAC has been awarded the prestigious and coveted "SKOCH Smart Technology Award – 2015" for various projects.

Mentor Graphics USA and SiliconIndia are jointly instituting Leadership award in few categories in the field of VLSI/Embedded space. They have been awarding organisations/Institutions in this field that have been excelling in this field and contributing to the community since six years. The award is intended to inspire the leaders to tread path of success and triumph and to recognise the vast contributions made to the industry at large.

Flood Response System developed by Spatial Sciences & Disaster Management (SS&DM) Group of C-DAC Pune received eASSAM 2015 Appreciation Certificate as an important ICT initiative to improve disaster management system in Assam during the e-Assam Challenge for best practice network programme for development initiatives in and for Assam at the ASSAM Digital Innovation Consultative Summit held at Guwahati on April 10th, 2015. It is initiated by the North East Development Foundation, Digital Empowerment Foundation and supported by the Department of Information Technology, Govt. of Assam.

CDAC, Noida has been awarded PCQuest Best IT Implementation Award of the year 2014 for e-Aushadhi application.

Developed by Spatial Sciences & Disaster Management (SS&DM) Group of C-DAC Pune under 'Pradhan Mantri Gram Sadak Yojana (PMGSY)' for the States of Mizoram, Manipur and Sikkim received INDIA GEOSPATIAL EXCELLENCE 2014 AWARD for exemplary usage of geospatial tools, which was conferred upon by Mr., Suresh Prabhu (Ex Cabinet Minister for Power) at the India Geospatial Forum at Hyderabad on the 5th of February 2014.

Commonwealth Association for Public Administration and Management (CAPAM) has recognized Mobile Seva as a Finalist in the 2014 International Innovations Awards under Category "Innovative Use of Technology in the Public Service".

EET CRS, the Research wing for Excellence in Professional Education & Industry has awarded Mr. SIVAKUMAR V., the AWARD FOR EXCELLENCE IN TECHNOLOGY RESEARCH in the Technology Leadership Awards-2013 at Noida on the 9th of February 2014.

Mr. Sivakumar V. is a Senior Technical Officer in the Spatial Sciences & Disaster Management Group (SS&DM) (erstwhile GSDG) at Centre for Development of Advanced Computing (C-DAC). This is his second consecutive award this year.

Pic: Award for Excellence in Technology Research in the Technology Leadership Awards-2013

Mr. SIVAKUMAR V. has been conferred with the title of BEST INDUSTRY RESEARCHER of the year 2013 by the Governing Council of Association of Scientists, Developer & Faculties (ASDF) at the 3rd Global Awards Committee 2013 headed at Pondicherry in the Union of Puducherry, India on the 30th of December, 2013.

SKOCH Order of Merit Medals and listing among India's Best-2013

C-DAC Mumbai:Three research projects of CDAC Mumbai have been awarded the prestigious SKOCH Order of Merit medals for their distinguished and outstanding contributions in enabling and promoting Digital Inclusion of Indian citizens into the ICT mainstream. These projects are:

Near Real Time Flood Monitoring for Brahmaputra Basin using Microwave Remote Sensing developed by Spatial Sciences & Disaster Management (SS&DM) Group of C-DAC Pune was recognised by the Grand Jury as a Finalist for the year 2012 and received the CERIFICATE OF RECOGNITION from eNorthEast 2012 in the category of 'Innovative Department/ Public Sector Agency or Unit'. The certificate was conferred in the 3rd eNortheast Award and 4th SIKITEX Summit at Gangtok on the 23rd of November 2012.

National Award for the Empowerment of Persons with Disabilities, 2012

C-DAC has won the National Award for the Empowerment of Persons with Disabilities, 2012 instituted by the Ministry of Social Justice & Empowerment, Govt. of India. under the category : BEST APPLIED RESEARCH / INNOVATION / PRODUCT DEVELOPMENT AIMED AT IMPROVING THE LIFE OF PERSONS WITH DISABILITIES. The award will be handed over by the President of India at a function to be held at Vigyan Bhavan on Dec 3, 2012.

A mobile based application MOTHER (Mobile based maternal Health Awareness) developed by Centre for Development of Advanced Computing (C-DAC), Hyderabad has bagged the public choice award in the eIndia 2012 conference.

"BharatiyaAFIS" (Bharatiya Automated Fingerprint Identification System) of C-DAC Mumbai has been awarded the prestigious SKOCH Digital Inclusion Award for 2012. The Silver award was under the Category of Innovation.

The ‘Short Term Open Access’(STOA, an Smartgrid market Component) software developed by C-DAC KP Bangalore has been awarded the Best Government to Business (G2B) Initiative of the Year eMaharashtra 2012 award. 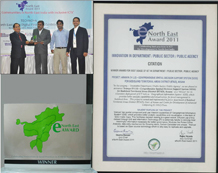 A Comprehensive Spatial Decision Support System (SDSS) for - Bodoland Territorial Areas District (BTAD) developed by Spatial Sciences & Disaster Management (SS&DM) Group of C-DAC Pune has been awarded the prestigious eNorthEast Award 2011 in the category of 'Innovative Department / PSU'. The award was handed over in the 2nd eNorth East Award Summit & Digital Festival at the Regional Institute of e-Learning & Information Technology (RIELIT), Kohima on the 25th of November, 2011.

IT Based Computer Aided Design Center for Empowerment of Rural Weavers / Artisans of Sikkim, Mizoram & Manipur

C-DAC, Thiruvanathapuram was selected as one of the ‘Finalists for the NASSCOM Social innovation Honours 2011’ under the category "ICT lead Innovation in Government Depts./Body”. NASSCOM Social Innovation Honours 2011 is a unique platform aimed to foster innovation in social development using ICT within the organizations and individuals. The award was based on the Mobile Telemedicine Project- 'Sanjeevani'.


"Best Excellence Award" of Government of Sikkim received by C-DAC, Kolkata for its pioneer initiatives in using "IT for Poverty Alleviation Program for Handicrafts and Handloom section development“ for the year 2010.

C-DAC's corporate website (www.cdac.in) has been chosen to bear the Golden Web Award, which is one of the most prestigious and respected international web awards."

Second Prize for Best utilization of the given space and good color combination
Bangalore IT.com 2001

Quizzing:
Karthikeyan Pillai and Chetan Kumar bagged the first and the fifth place in the Inquiz IT and Brand Equity Quiz 2001, respectively.

Best Hindi Computer Package
at Awards for Excellence in Electronics

Bronze medal by Sun Microsystems, South Asia for marketing the suite of Sun products in India